The tale of Twiggy Mommet, A very British protest 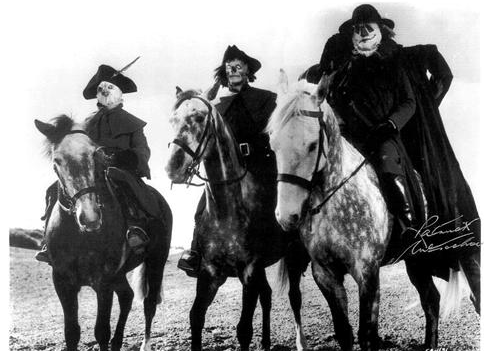 My main contribution to VBCW mythology is the Twiggy Mommet phenomenon - a rural protest movement where the agitators dress up as scarecrows in order to defy the authorities. This is what I wrote about it on the GWP...

Herefordshire, once the centre of Anglican resistance, had only been under Royalist rule for a few weeks when Tom Corbin, a keen market gardener, placed a scarecrow wearing a BUF armband in his Ledbury allotment, in protest at the new authorities' levy on the sale of foodstuffs.

Keen to stamp out any signs of dissent, the governor of Hereford sent a BUF patrol to investigate. Corbin was duly arrested, his goods confiscated and his scarecrow publicly burned in the centre of town. Job done.

However a few nights later, a strange mob marched down Ledbury high street. Dressed in old clothes, their hands covered with rags and their faces with hop sacks, they broke into the local gaol, bound the constable on duty and demanded the release of Mr. Corbin from captivity. Upon hearing that he had already been let off with a caution, they contended themselves with tearing up any official papers they could find, before making a hasty exit at the approach of police reinforcements.

A note pinned on the door of the gaol, addressed to the governor from 'Twiggy Mommet, King of the Scarecrows', stated that the attack was in retribution for the 'unlawful murder by fire of one of my subjects in the once happy town of Ledbury.'

Soon other scarecrows were cropping up around the county, not only in the fields and gardens of suspected Anglican supporters but also, under cover of darkness, the estates of leading royalists. Some bore BUF insignia, while others were made up in effigy of the King or his new wife. Many of them wore pieces of clothing previously stolen or snatched from BUF members, such as sidecaps and armbands. The authorities duly removed and destroyed these mannequins, which in turn led to further disturbances by 'scarecrow' mobs, wielding various agricultural implements, in revenge for these 'killings of our straw brethren'.

Determined to nip this embryonic rural protest movement in the bud, the BUF laid a trap by arresting a well-known local postmistress, one Ms. Prudence Powell, after secretly erecting their own scarecrow in her garden. Sure enough Twiggy Mommet's subjects came out to free the stricken damsel. This time however, no doubt due to some well-placed local informants, they had swapped their pitchforks and scythes for rifles and shotguns.

Blood was spilled and lives were lost, but Twiggy Mommet's scarecrow army marched on, leaving their gardens, allotments and fields to protect any Herefordians wronged by the authorities and their BUF henchmen.

I also thought about a royalist group...

I write to you in the most tip-top of spirits, after not only having a most productive day at the races yesterday, but also after taking part of the most madcap of escapades!

Lady Luck was shining upon your number one son, together with Bunty, 'Nobbler' Ffipps, 'Sausage' and the rest of the gang. It was race day, and we'd all made a rather pretty packet on Dandy Lad - Lord Bigglesworth's horse. Flush with victory, we retired that evening to 'Chopper' Chigwell's pad, Shortbrook Manor, for a beverage or two.

While originally hailing from the Americas, Cincinnati to be precise, Chopper had thrown himself into the life of an English gentleman of means ever since purchasing the manor some years ago. In doing so he had naturally pledged his allegiance to the King when all this trouble started - for in even in this quiet corner of Buckinghamshire the rumblings of rebellion are not far away.

Now, it transpires that some of the locals had taken umbrage against the poor fellow's stance: most notably his raising of the rents in order to help equip the Bucks Blackshirts. Talk over Cognac soon turned to this, and how some of the local Johnnies had had the temerity to cause a fuss over it. Apparently some of them, aping this ridiculous fashion for dressing up and planting scarecrows in the grounds of their superiors, had plonked one right in the middle of Chopper's front lawn!

'We'll not stand for this!' we exclaimed. 'If they wish to play silly blighters, then so shall we!'

Now, being an American, Chopper always gets a little loopy over Halloween and, it being near that time of year, Shortbrook Manor was full of fake cobwebs, pretend spiders and wotnot and, of course, hollowed out pumpkins.

'I know,' said 'Noodle' Smyth, 'let's dress up as pumpkins and give these scarecrow fellows a taste of their own medicine!'

And so, an hour or so later, we crept upon The Spaniard's Arms - headquarters of these miscreants. Our heads encased by pumpkins, our bodies protected by bits of armour from Shortbrook's ancient armoury, we advanced into the very heart of rebellion!

Oh dearest Ma you should have seen their terror stricken faces! With cudgels flying we dispersed the evil-doers and put paid to whatever outrage they were planning. Laden with a wheelbarrow full of broken scarecrows, we marched triumphantly back to the Manor, proclaiming to all who would listen that His Highness, and the rightful government of England, had a new champion - the Royal Order of the Knights of the Pumpkin Patch!

PS: Can you recommend a suitable method for removing pumpkin seeds from one's hair?

PPS: How does one go about making Papier-mâché?

Email ThisBlogThis!Share to TwitterShare to FacebookShare to Pinterest
Labels: Pseudohistory