The Battle of Much Marcle

The Anglican League make a push on Ledbury - an excuse for me to disappear during the royal wedding last April! Another write-up from the GWP...

The Anglican League enclave in Ross, Herefordshire, is in trouble.

Under the command of a firebrand Welsh vicar, the Reverend Henry Meredith, Anglican forces in the area have being slowly building up strength, but have yet to formulate a clear future strategy.

They are also in a rather unhappy marriage with the Welsh nationalists – a hangover from the Bishop of Hereford days. The Welsh are becoming more and more unpopular with the locals around Ross, where the heady days of revolution have begun to revert back to a conservative, anti-Welsh, traditionalism. As a result of this, Meredith and non-local units under his control are beginning to be viewed with suspicion, with many openly questioning his suitability for leadership.

To make matters worse, supplies are dwindling. Arms and ammunition from Monmouth are becoming a rarity as the difficult route from North Wales, down the border to Monmouthshire, is increasingly disrupted by royalist patrols of the Legion of King Offa in Herefordshire. There is also the suspicion that the Welsh are funnelling most of their supplies to the more lucrative market in Shropshire.

The alliance with the nationalists has also put paid to any co-operation with coal mining leftists in the Welsh valleys – who are at any rate squaring off with the Mayor of Cardiff, while the less reliable assistance of radicals in the Forest of Dean to the south has also dwindled as they prepare their defences against the Duke of Montfort in Gloucestershire who is determined to snuff out their banditry.

In short, Meredith needs new allies, and as such, puts his faith in God – who does not disappoint.

For across the border in Worcestershire, the Malvern Hills Conservators have scored a decisive victory against the hated BUF at Drugger's End, near Castlemorton. The Malverns, and nearby Ledbury, have a tradition of anti-fascist leanings – from the Twiggy Mommet movement to this recent battle, the area is ripe for an Anglican rebellion. It is only natural that Meredith and the MHC should join hands at Ledbury.

A plan is formed. For the Anglican League to take Ledbury they must first occupy the village of Much Marcle on the Ross-Ledbury road. Here lies the only significant obstacle to an eastward advance – Hellens Manor and the local royalist LDV, the Much Marcle Wanderers. If this threat can be neutralised, a message will be sent to other local landowners, upon whose support the thinly-stretched BUF (in the shape of the Three Counties Legion) rely heavily.

Once Much Marcle falls, Meredith hopes, the citizens of Ledbury will rise up in support of the League and he will be able to link up with not only the MHC, but the Severn Riverside, Wharf, Labours, Federation (SRWLF) in the Diglis canal basin and the remnants of the larger AL forces who are lurking somewhere south of the Malverns following the Severn Valley campaign. With these forces united, a push towards the King’s residence at Madresfield and/or the occupation of Worcester could well be the next step.

It’s a huge gamble, for word travels fast in Herefordshire and the royalists will be quick to respond to any attack, but the possible gains are immense. And so the Anglican League head east, while the MHC head south, skirting Ledbury to reach Much Marcle via Dymock. The scene is set – will the Anglican League turn the tide, or will the BUF get their revenge against the Conservators? Once again gunshots will ring out in the shadow of the Malverns. 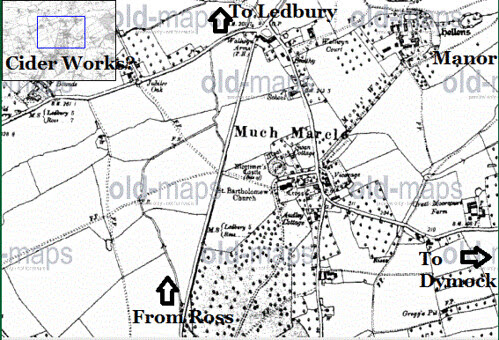 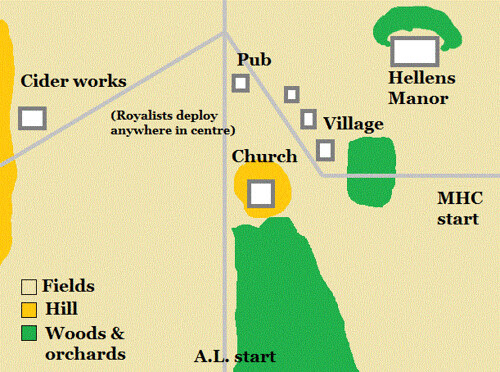 Once again I'm going to quote Giles for an after action report...

JP and I had a really good game today.

The Anglican league were attempting to push eastwards towards the Malverns, and the Malvern Hills Conservators (MHC) though nominally Royalist were looking for support ion their spat with the BUF. Obviously the BUF were keen to stop this link up.

The village of Much Marcle was the centerpiece,with Westons' cider factory as an objective the BUF dug in and the Anglicans started their attack...only they didn't because JP pulled a random event card that destroyed his communications.

The next two rounds were spent in desultory fire, the BUF's tank fired ineffectually at the armoured car of the Anglicans. The Anglicans lost an HMG and half a unit, whilst destroying the BUF tank

Then the MHC arrived. JP pulled a car from the random events that showed the MHC and BUF were deadly enemies, both sides charged towards each other recklessly. Their armoured car careered through a fence to engage with the elite BUF unit. Ther two sides engaged in hand to hand combat

The MHC wiped out one BUF unit, but the BUF wiped out their command unit and captured the MHC's commander seeing off a second unit. The MHC with their HMG already suppressed ran for it.

Result: The BUF defended their position. The Anglicans have a toe hold in Much Marcle and the MHC have been repulsed.

We also had (royal wedding) cup cakes from JP's wife. 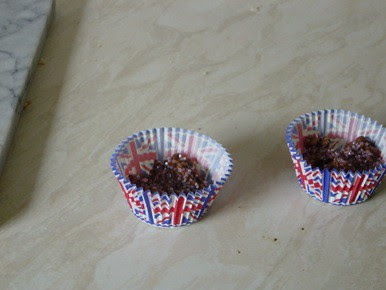 The village of Much Marcle. The Anglican League's entry point is bottom left. The BUF have defensive positions at the top end, while the MHC arrive at the right hand side. 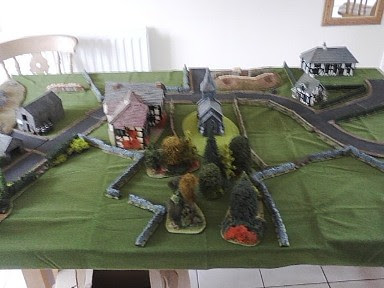 The BUF dig in and await the enemy 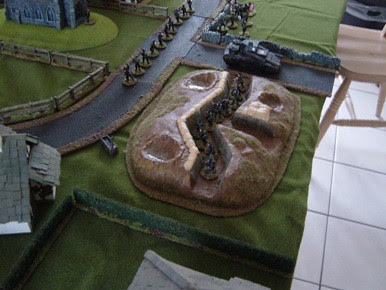 The Anglican League advance towards the village (eventually) 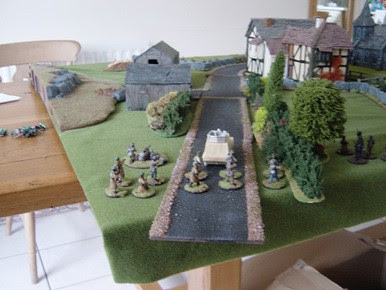 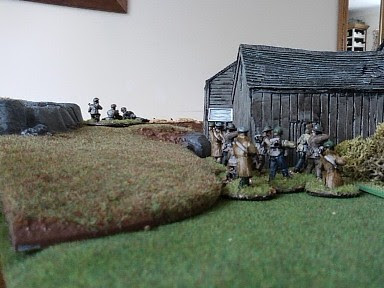 ...To avoid fire from the BUF's tank and MMG 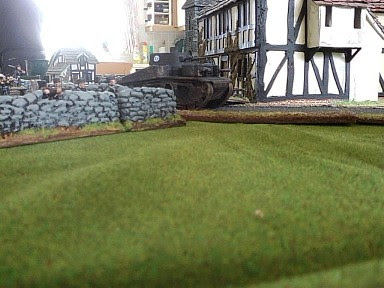 The AL advance under fire towards the church in the centre 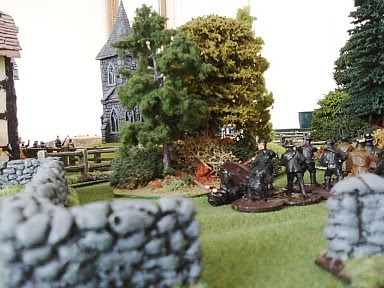 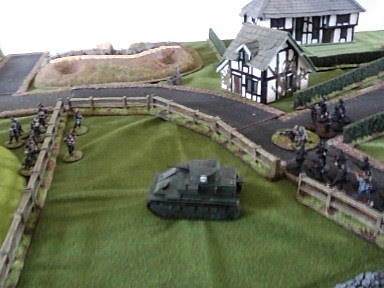 The AL occupy the pub - cheers! 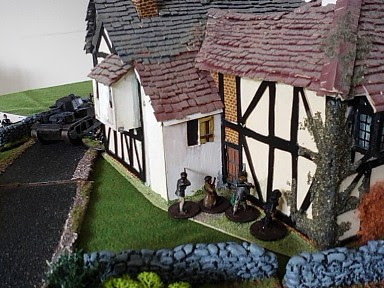 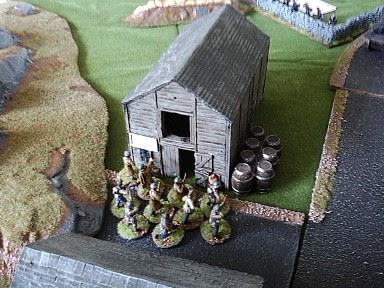 Deprived of a drink, the BUF right flank pour fire at them from their defence works But on their left, they spot their hated foe and, desperate for revenge, leave their trenches and charge! 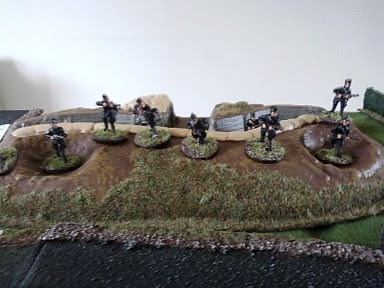 An almighty scrap ensues between the Buf and MHC 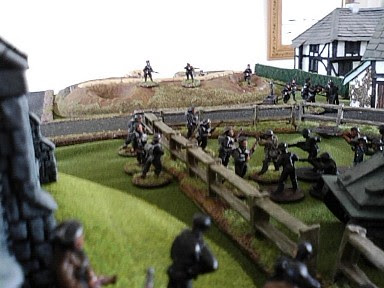 On the other side, the AL and BUF exchange fire 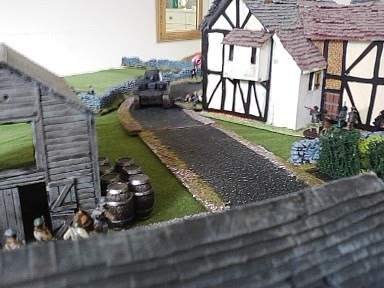 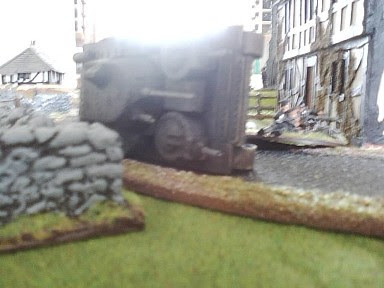 By the church, the MHC and their armour get the better of the BUF 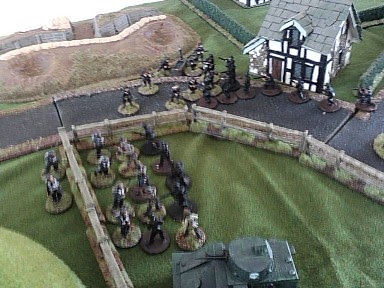 But the MHC's command decide enough is enough after being battered by their mortal foe! 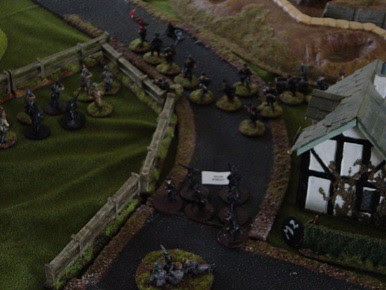 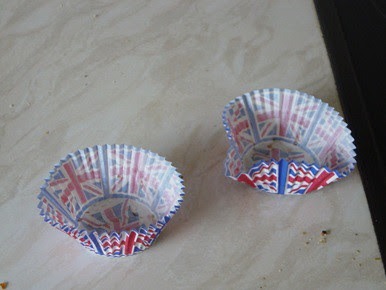