Last weekend’s big game at Evesham, hosted by the fine chaps at Gripping Beast and organised by VBCWmeister ‘Mort’, was brilliant! Let me make that clear now, for after reading the following battle report, you’d be forgiven for thinking I had a miserable time!

The town of Causton and its environs was represented by two tables, each resplendent with lovely bits of terrain and buildings. One table represented the northern approaches to the town, the other the south, with the town straddling the gap between the two. This gap represented the largely impassable river, with the exception of when it meandered out into the southern table.
﻿ ﻿
﻿
﻿The dastardly forces of the BUF, consisting of me and fellow GWP members Giles and ‘Reiverdance’, were given the job of taking Causton on the southern table.

Having only recently started collecting and painting VBCW miniatures, I had my work cut out building up an army to the 2500 points size required by the scenario. In the end my force – the Herefordshire Expeditionary Brigade – consisted of my battalion of Blackshorts (command, three infantry companies and HMG and anti-tank rifle support), my LPA battalion (command, two companies of shotgun infantry, a team of snipers and a mob of scarecrow protesters) and enough figures scraped together to make a brigade command (including my Edward VIII and Wallis figures – impersonators doubling as morale officers!)

I then cadged two black-clad BUF companies, an HMG team and some command figures from Giles which, together with my hurriedly painted police company, made up another battalion. Finally I borrowed a Vickers MkII medium tank from Giles to supplement my two ‘Evelyn’ improvised armoured vans to create an armoured company. This force, while perhaps true to the amateur spirit of VBCW, was in retrospect severely lacking in heavy firepower, as I was soon to discover!
﻿

We fascists were allowed to set up our forces on three sides of the southern table and I rather unimaginatively elected to bring my troops on at the southern end, opposite the town, taking up the far left flank and thus lining up alongside my fellow bad guys.

Facing me was Rob with his socialist Chester Local Defence Force, complete with HMG-armed motorised Trachankas, LMG-toting sports cars and truck-borne socialist militia. Supporting him was a battery of artillery and a mortar holed up in Causton. My force, a third of which carried only shotguns or farming implements, was rather outgunned.

My first mistake was to bunch my battalions together. The BUF/police were all jammed into a walled enclosure in a small village at my far right; the motorised company took up the road to their left; while in the countryside to their left I put the Blackshorts; leaving my LPA as reserve. Seeing such a tempting target, the socialist artillery in Causton, commanded by ‘Red Rich’, opened up on my BUF/police battalion before I even knew we had started! The bemused Blackshirts were blown to smithereens and I lost an entire BUF company, the HMG and half the command unit before I had fired a shot. The two surviving companies took refuge in the village buildings, joined by the brigade command, lest they be next on the artillery spotters list. Luckily his attention was then occupied by Reiverdance’s advancing tanks and I was spared any further artillery mauling.﻿﻿
﻿
Facing me, having won the first initiative roll, Rob immediately and bravely took the battle to me by advancing his Trachankas into a circular hedged field that just screamed ‘redoubt’. Backed up by his racing cars, anti-tank rifle team and mortar, he proceeded to shoot up the Blackshorts, who lost their entire HMG/anti-tank support company.

I was left with nothing bigger than the cannons of the armoured company, who singularly failed to take out the Trachankas or indeed much else, and were soon facing fire from Rob’s forces not only in the redoubt but also the company of schoolboys he had placed further back.

My 'plan' was to decimate the redoubt, while the shotgun-toting LPA reserve, screened by the scarecrows, outflanked them. With firepower now seriously unbalanced in favour of the socialists, this sweeping action became a slow slog as the Blackshorts took cover in a nearby cornfield and returned fire against Rob’s machine guns. My only hope was to deploy my reserves only and try to get up close so that the shotguns could do their grisly short-range business. This move would also bring on the LPA sniper team, who, it transpired, were the only ones able to deal with the Trachankas by picking off their crew.

With the landowners forced to support my attack on the redoubt, the now reduced flanking move was slowed down by the scarecrows, who, while being an effective shield, went to ground time after time due to the withering fire they faced not only from the redoubt (now reinforced by a company of militia), but also a company of militia recently deployed along a hedge-line behind the redoubt.
Meanwhile my armoured company was taking heavy fire while not giving much back (at one point I was forced to declare my vehicles as ‘open hatched’ and thus vulnerable, so that they could successfully spot their targets!) These vehicles, together with the surviving BUF and policemen, did their best to hold the village against the schoolboys’ accurate (I say jammy!) rifle fire, in addition to mortar and HMG fire from the defences of Causton – not very promising since it was me who was supposed to be on the attack!

Further along the table, Reiverdance and Giles had advanced slowly, eventually reaching the river but going no further as Red Rich’s dastardly artillery began to zero in on the BUF armour. Of the three of us, Giles was having the better time of it, but still could not crack the defences of his opposite number in time.
At the redoubt I had managed to deplete the defenders (forcing back the militia company) and silence most of the Trachankas, but only through judicious use of snipers and political officers to stop my forces from breaking. However by now I had lost all my armour to Rob’s fire, while the BUF and police were wavering. The end for them came when Rob’s Light Car Reconnaissance Squadron raced towards the village with machine guns blazing, causing the remainder of the BUF battalion to take to their heels and catch the next train to Hereford.
﻿
﻿With such a large hole punched in the fascist line, Reiverdance was forced to deploy some of his reserves to fill the gap, lest the socialists roll up his flank. In order to deal with these reserves, Rob withdrew his forces from the redoubt, putting them back into their trucks to drive down to the recently cleared village. Obviously he no longer saw my forces as a threat – I didn’t know whether to be relieved or insulted!

At last the battered but victorious Trachankas withdrew from the redoubt, leaving the route to Causton open for the Hereford Expeditionary Brigade. However they were in no position to take advantage of this. And thus the day ended with my forces well short of their intended target and the defences of the town still intact.

On the northern table, things had gone a little better for the Royalists, who had taken the hotel (a major objective for one of the factions) and giving the Anglican League defenders of Causton a severe mauling.

However on day two the Anglican League and socialist allies managed to make back much of the Royalist gains on the north table, whilst successfully defending a further BUF attack in the south.

So what lessons did I learn from my first ever big game?

1 – Buy bigger toys. It is only natural that players will want to bring their biggest and baddest kit to these events and one needs to have an effective answer to this unless such big guns are limited in future scenarios.

2 – Don’t lump one’s troops together. You might as well paint a great big target over them!

3 – Be more imaginative with one’s deployment. I could have started at another table edge and thus bypassed such an obvious defensive position as the circular field, although this would risk me being cut off from the other BUF brigades. I would still have got battered but might have had a less static game!

4 – Big games are fun no matter what! Yep, despite being so utterly drubbed, it was great to meet so many VBCW fans and put the faces to the usernames. I was also nice to drool over other players’ toys and have one’s own toys drooled over in return – huzzah for big games!

This Saturday I’ll be off to Evesham for the Big Game – a two day event where many VBCW fans mass their armies together for one great big dust up (although some, like me, are only able to attend for one day).

VBCW organiser extraordinaire ‘Mort’ has once again come up with a scenario, based on the fictional county of Midsomer (from the popular TV show Midsomer Murders). The basic gist is this:-

There has been an assassination attempt on Royalist hero Col. J T Dunbar. The colonel, who was wounded in the attack, is now resting after surgery.

King Edward is said to be ‘outraged’ by the attempt on Colonel J T Dunbar’s life. The King met the Colonel earlier this year to honour and promote him for his victories in the battles of Weston-Super-Mare and Axbridge. The Colonel had then taken command of Royalist forces in Chippenham, where the attack on his life took place.

The King has ordered Lord Cirencester to start an investigation in to the shooting. For his part Cirencester has given the task to Chief inspector Barnaby, ex of the Met now working in the British Intelligence Service.

Sources close to Lord Cirencester believe it was the Somerset Freedom Fighters who tried to kill Colonel Dunbar, however the SFF have denied this. News has emerged that the SFF have however ambushed a royalist supply column.

Chief inspector Barnaby’s investigations have led him to the town of Causton – held by the Anglican League. He must have discovered something fishy in the town, for the King has since ordered an attack on the town by his royalist forces and their BUF allies (including my Blackshorts and whatever else I can bring to the table!)

Thanks to a little role-playing via email, my forces have been able to reconnoitre the area, and, while been driven off by Anglican League Piquets in some cases, have gleaned some very useful information.

Using the Brigadier ‘38 rules, each player can field up to 2500 points worth of stuff. Currently I have 1700 points worth painted, so will borrow a few figures and vehicles off Giles to make up the shortfall. This will be my first ever big game and I’m looking forward to it immensely! 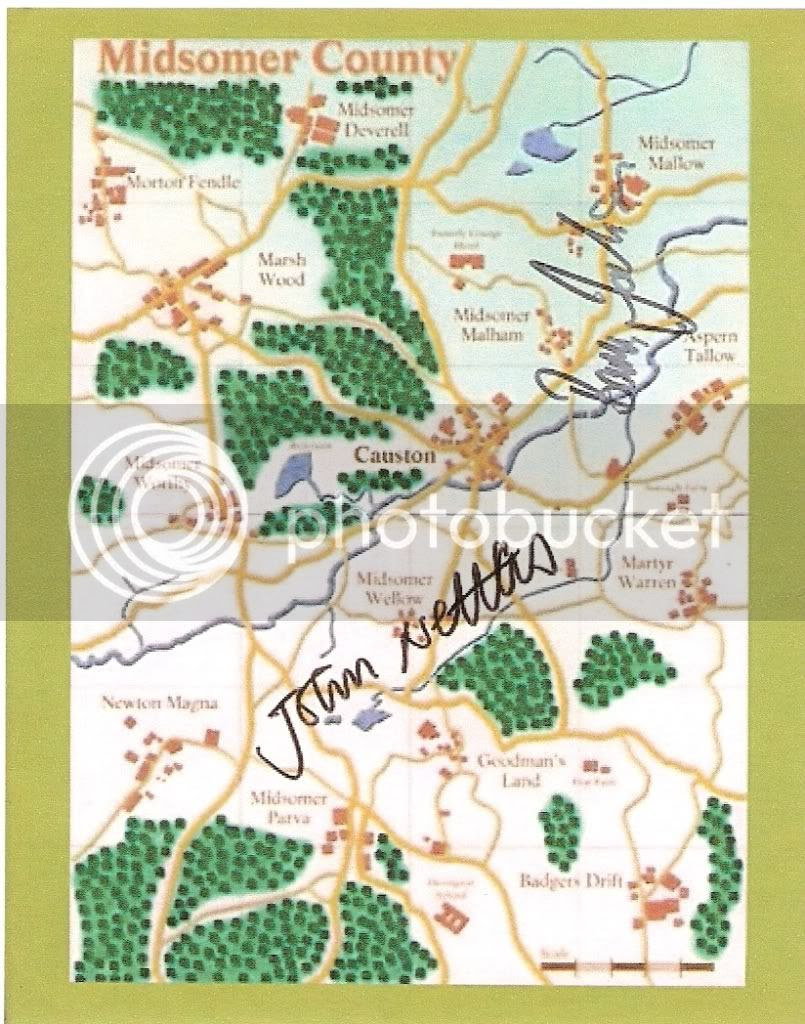 Another group of LPA militia:- the Abbeydore Rangers - a more rag-tag bunch of farmers and villagers, rather than an aristocratic shooting party.

Figures are a mix of Gripping Beast, Musketeer, Hasslefree, Artizan and Ironclad.