So the next VBCW Big Game (now under new management) is scheduled for April 1st, but it’s been ages since I played a game, and I’m a little rusty on the ‘Went the Day Well?’ rules. Luckily the chaps at the Hereford Wargames Club, many of whom will be attending the event, decided to have a practice game last night and kindly invited me along.

With an offensive in the offing, General ‘Buffy’ Blowhard, a senior BUF staff officer, is being flown through stormy skies en-route to brief the local Fascist forces when his pilot is obliged to make a forced landing somewhere behind Anglican League lines.

After destroying the plane (and any sensitive documents therein), Blowhard and the aircrew make their way to the nearby village of Much Dribbling. Here they intend to lie low until BUF and Blackshort forces can be mobilised to rescue them. However local Anglican League and Albertine garrisons have also been alerted by the crash, and they too are on their way to investigate.

And so battle is joined! BUF and Blackshort (me) forces hurriedly deploy piecemeal along one side of the table, whilst the rebels do so likewise opposite. I start off with my HQ and tank entering on the road to my right, the Metropolitan Blackshorts infantry section in the centre and the Sidcup Highlanders on the left.

The Metropolitan Blackshorts advance through a cornfield towards the village church – will the fugitives be hiding in there? The HQ section also advances, with the specialists splitting up to support the infantry sections. Signallers and anti-tank rifle team race forward to the church walls in order to get a view of the enemy.

Meanwhile the Sidcup Highlanders search the nearest house for General Blowhard and co. but discover nothing. It takes a turn to search each building and read the small blue piece of paper secreted therein. Meanwhile my BUF compatriots are also moving forward, as do our opposite numbers.

My tank spots a target – believe it or not Zulus?! No doubt rounded up by some zealous Anglican missionary, they are in the open. The tank opens fire and, while dealing little damage, causes the brave, if misguided, warriors to waver.

More scattered reinforcements make their way onto the field. The Ladies’ Fascisti cycle into the fray on my left, just in time to see their battle-hardened Highlander comrades throw themselves to the ground, startled by a backfiring car!

Both sides are now inching closer to each other. The Metropolitan Blackshorts clamber over the church wall and begin to investigate the hallowed building. Along the road opposite, the enemy is struggling to get over the hedges but are nearing some ruined houses.

Suddenly a group of men break cover! As the rebels approach the ruins, General Blowhard and the aircrew race from their hiding place. They quickly cross the road towards the church and the protection of the Blackshorts.

Both sides are starting to get to grips with each other. As Blowhard makes his way through the Blackshorts and back to BUF territory, the forces of order begin to exchange fire with the rebels. On my right, the tank is poised to unleash more terror upon them, but a well-placed shot from an anti-tank rifle disables it’s gun.

My signallers can now see the enemy and are directing mortar fire onto them. They are joined by the largely redundant Blackshort anti-tank rifle team, who are quickly wiped out by enemy HMG fire. On both flanks my BUF allies are pressing forward.

The Metropolitan Blackshorts occupy the church and begin to fire at the enemy, now taking cover in the recently vacated ruins opposite. The BUF artillery truck opens fire on these rebels, but the shot goes astray and lands perilously close to the church.

On the left flank the rebels occupy more ruins and a firefight erupts between them and the BUF, who are soon joined by the Sidcup Highlanders, whilst the Ladies’ Fascisti take up positions in reserve. Among the enemy ranks, cricketers make good use of their bowling arms by lobbing grenades instead of googlies.

The shooting is intense and both sides take casualties, but eventually one section of rebel militia can take no more and makes a run for it, muttering something about a lost scarf. However the triumph is short-lived as rebel armoured cars suddenly appear on each flank. Meanwhile Blowhard and co. are withdrawing through the cornfield behind the church as fast as they can.

By now the Marches Blackshort infantry section has arrived. They make a beeline for the church walls, where the spotting team and runners are holding the line and suffering for it. The rebels cannot hope to catch General Blowhard, so all the Blackshorts and BUF have to do is hold them up long enough for him to make his escape.

On the right flank the BUF exchange fire with the rebels. Again the fighting is deadly to both sides but it does the job of holding up the enemy. By now the hour is late and it is clear that Blowhard and co. will make it off the table safely. The BUF battle plan for the coming offensive is secure…

A fun, and well overdue, VBCW battle! The forces of order took the lion’s share of casualties but managed to rescue the General from rebel clutches. In reality the purpose of the game was to reacquaint ourselves with the rules, and for that it served it’s purpose well. Lots of laughs all round – great stuff! 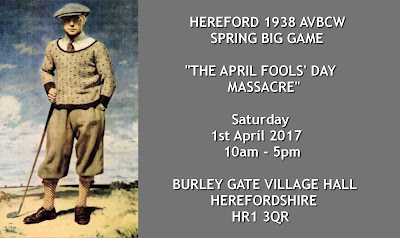