Back in the Saddle

After weeks of apathy, I started getting an itchy paintbrush. Luckily I had a small unit of cavalry already undercoated – this is their story…

Trooper Riley’s horse was skittish as he and his fellow Blackshirts waited on parade; it’s hot breath mixing with the early morning fog of a cold London morning. ‘Hercules’ jerked it’s head, picking up no doubt his rider’s own nerves – for today, it was rumoured, they would be addressed by someone important. Fuller perhaps, or Jenks – maybe even Mosley himself!

“Whoever it is, I wish ‘ed get a bleedin’ move on!” Riley muttered.

“They like to keep us hangin’ abaht,” replied his neighbour, ‘Monkey’ Harris, astride his own black steed. “Y’know – get us all in a two-and-eight. Make’s ‘em feel big dunnit?”

Riley huffed in reply, wondering how, years after first stepping out in his uniform as a young tearaway and facing a crowd of baying lefties, he could still feel nervous as a trooper in Mosley’s cavalry. Surely all those nights patrolling the estuary, riding down protestors in Hyde Park and skirmishing along the front line would have hardened his nerve more than this?

Riley watched, butterflies wheeling, as a black Roller had pulled up in front of them, the back door pulled open by some lackey to allow some high-ranking nob – all medals and sash - to climb stiffly out.

He nodded almost casually to the stiff row of mounted troops before him. “Gentlemen,” he said, his voice as hard as his gaze, “I am Baron Foy, and as of this moment you are under my command.”

The line of cavalry rippled a little.

“Tomorrow you will leave the comfort and civilisation of the capital and join the Three Counties Legion on campaign in the provinces. Herefordshire to be precise – a place you will have never heard of, but a place that you will soon learn to hate. Use that hate gentlemen, for you will need it.”

“In honour of the sacrifice you are about to make, I have been authorised by the Prime Minister to bestow upon you an honorary name of my choosing – the Bethnal Green Auxiliary Mounted Rifles being a bit of a mouthful, is it not?”

“Therefore I have devised an honorific that reflects both your magnificent black steeds and your own steely determination. From henceforth you will be known as…”

He paused for effect.

These figures are Crusader Miniatures WW2 German cavalry, and I have some Musketeer BUF cavalry waiting to join them once they’re undercoated.

On a completely different note, I’d like to point out an amazing bit of scratchbuilding, currently in the ‘How To’ section of the Lead-Adventure Forum.

Mark, AKA Tin Shed Gamer, has built a steam traction engine entirely out of cardboard and superglue! His efforts can be followed here.

Mark reckons that it’s something I could easily build, although I respectfully disagree! As a compromise I have agreed to have a crack at a (hopefully) simpler model – an armoured traction engine similar to that employed in the Boer War:- 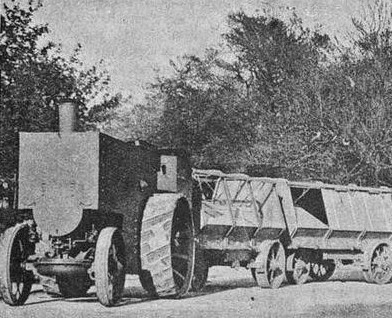 Email ThisBlogThis!Share to TwitterShare to FacebookShare to Pinterest
Labels: Miniatures