The Battle of Shobdon Instructional Centre

“Rise at six; roll blanket, sweep up tent, wash, breakfast at eight o'clock, then line up for roll call, get your tools out and off to the forest till five p.m.”

Shobdon Instructional Centre, like other such facilities across the UK (including Gilling, N. Yorks: pictured above), was set up in the interwar years as a work camp designed to toughen up the ‘soft’ long-term unemployed through discipline and strenuous manual labour such as woodland clearing and ditch digging. Those that failed to carry out their allotted term within the camp would see their unemployment benefits cut.

Once Herefordshire was largely under Royalist control, Shobdon Instructional Centre, closed in 1937, was reopened as a ‘reconditioning centre’ - effectively a political prison camp. Relatively isolated, dozens of undesirables, mainly left-wing agitators and POWs, were interned at the centre. Under BUF guard and the watchful eye of local militias, the inmates were forced to continue the back-breaking work of the former occupants, while their overseers extolled the virtues of the corporate state.

However this was all about to change. The siege of Ledbury drew many royalist troops from the area, leaving Shobdon and Mortimer Country in general, perilously under-guarded. The socialists in the Black Country saw their chance to free their imprisoned brethren and thus, while the bulk of their forces travelled south to assist their Anglican League allies at Ledbury, a small force split off and headed west through north Herefordshire.

Their plan is twofold – liberate the inmates of Shobdon Instructional Centre and provide them with arms, thus establishing a cadre of socialist fighters in this thinly-settled area. Hearing word of this socialist raid, militias have been mobilised by the local landowners in order to stop the incursion.

If the socialists are successful, then the downtrodden rural workers will naturally rise up and join the embryonic force thus formed. Failure will see off red menace and stop it from spreading its tentacles into Herefordshire.

Giles and I played this scenario with the ‘Went the Day Well?’ platoon level rules. Random elements were added by my event cards (designed for Brigadier ’38, but with a little tweaking useable for WTDW). The table was largely open countryside (with some hedges, walls and a road), with the camp in the centre, flanked by some woodland on one side and lightly wooded rocky hills and some swampy ground on the other.

We decided to spread the prisoners between the two camp buildings and the woodland (a logging party). To liberate them, the socialists had to occupy each building (or halfway through the wood) for a turn, which would yield 1d6 miniatures. They would also have to capture the camp lorry in order to spirit them away. Each side consisted roughly of 30 infantry, with command, support and vehicles. After a couple of turns we diced for reinforcements at the end of each turn.

As the BUF defender I deployed first, placing the bulk of my forces (one unit of BUF, the command group, HMG, armoured car and motor-combination recon group) in the camp. I placed the veteran ‘Monmouthshire English’ unit into the woods on my right, while a green unit of lightly-armed village militia patrolled the countryside to my left. Giles’ socialists appeared on both flanks – an infantry unit and improvised armoured car opposite the woods, and the bulk of his force behind the hills to my left.
﻿
﻿﻿﻿﻿﻿ ﻿
﻿﻿﻿﻿﻿﻿ ﻿

With Giles repeatedly winning the initiative, a unit of socialists advanced around the hill to engage my centre, so I moved my motorised units out of the camp and along the road to meet this threat, whilst bringing the BUF infantry up to the barbed wire fence. Meanwhile the village militia slowly trudged through the swamp in an effort to reach the nearest hill before the socialists’ flanking move got there first with a veteran unit. In this they failed, but managed to get a couple of shots off before the reds replied with superior firepower.

﻿
﻿On my right, the reds advanced into the wood, supported by the armoured car, while their HMG units on the hill (kept in both ammunition and crew thanks to a couple of lucky chance cards) covered the centre attack, quickly knocking out most of the recce unit, whose own fire had been largely ineffective. On my left the depleted villagers broke, being callously shot in the back by the godless Bolsheviks – a dastardly act that would not be forgotten!

In the centre the armoured car and remaining combination withdrew back to the camp, partly to avoid a duo of tank busters who were lurking amongst the general socialist advance on my left flank and centre. To my right the combined fire from the red infantry and armoured car broke my veterans as socialist reinforcements arrived to support the drive to the woods. Things were looking bleak – the units on both flanks were wavering in the face of red firepower and my motor pool, with their MGs, was severely depleted. Had Giles not sportingly neglected to roll for more reinforcements for a turn or two, I would have thrown in the towel soon.

Things however began to take a turn for the better. As my armoured car duelled with the HMGs, with neither side doing much damage, the combination joined the HMG to assist in defending the camp, turning their sights on the improvised armoured car on my right and knocking out it’s MG, leaving it with only shotguns. The BUF infantry in the camp’s defensive fire began to tell on the reds and their centre advance began to stall as they in turn took up positions along the fences and hedges. The socialist tank busters (one of whom was busy having a crafty fag) also succumbed to BUF bullets.

By moving my command unit further to the right I was able to rally the retreating veterans in the wood, who quickly turned and blasted away at the pursuing reds. To my left, desperately needed reinforcements arrived in the form of the Weasley Whateley family, who (thanks to a random event card) had been drinking cider for most of the day and as a result were fired up and looking for a fight! 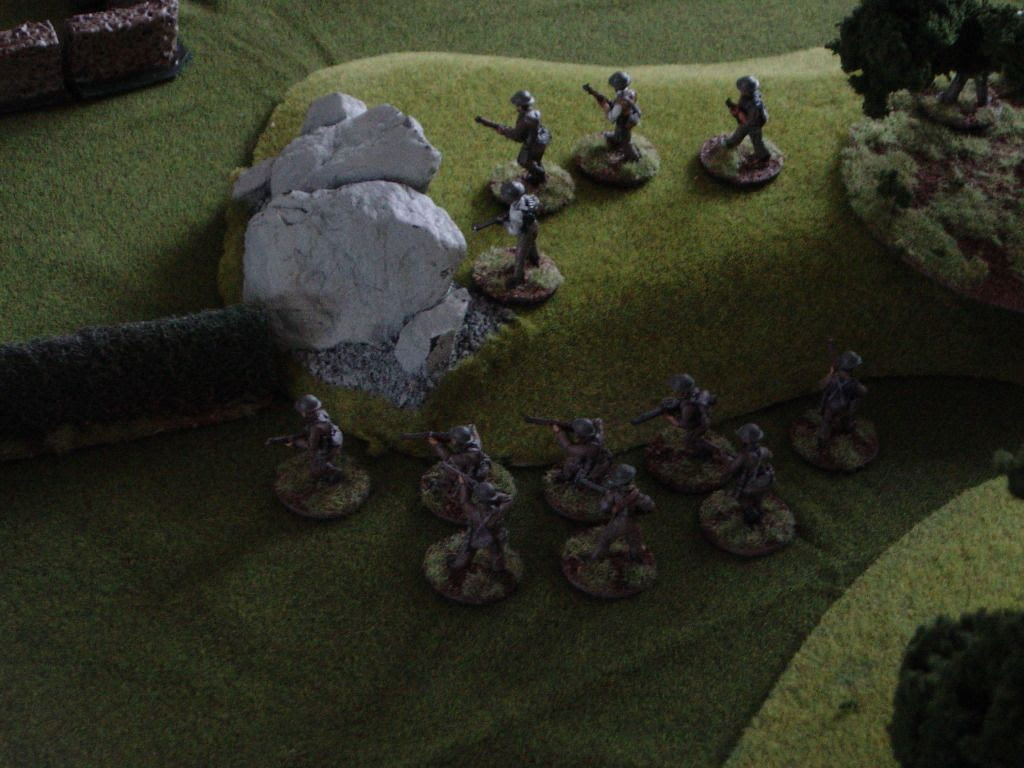 These dodgy characters immediately moved to protect the left flank, lining the hedges and walls before blasting away at the socialist veterans who had dug into the rocks on the hill. This fire fight lasted for the remainder of the game as neither the well-trained socialists or the drunken rogues would break, despite the loss of numbers on both sides.

In the woodland, and despite the arrival of more socialist reinforcements, the veteran BUF, supported with fire from the HMG, motorbike combination and pistol fire from the command group, drove off two waves of red assaults – shouting ‘remember the villagers!’ as they blasted into the backs of the running reds. Ignoring the now largely weaponless improvised armoured car, the BUF armoured car also came up in support, breaking off its fruitless duels with the red HMGs, which had been rendered largely useless due to the socialist horde that now blocked their line of sight. Although the BUF MHG eventually succumbed to the red’s return fire, the right flank held, keeping the red tide at bay.

In the centre the socialist advance had well and truly petered out, although with their field of fire now clear (until their improvised armoured car interposed itself between the BUF and the reds) the depleted but steady BUF still had the red HMGs to contend with. On the left flank the timely arrival of some Blackshorts was able to prop up the Whateleys as the light began to fade and, thanks to another chance card, a dispiriting drizzle began to fall, dampening everyone’s ardour.

And so we called it a day. It was a very close run thing, with the advantage seesawing between both sides and with reinforcements, random event cards and successful morale rolls being deciding factors. The exhausted BUF held the camp and could claim a victory of sorts, but while the socialists failed to liberate any prisoners they had given their enemy a very bloody nose and remained in the vicinity in large numbers.

The red menace was here to stay…

A report of the battle from Giles' perspective can be found here, while more photos can be found my my Photobucket, here.
Posted by JP at 10:08