Read All About It – Part 1: Mosley in Hereford 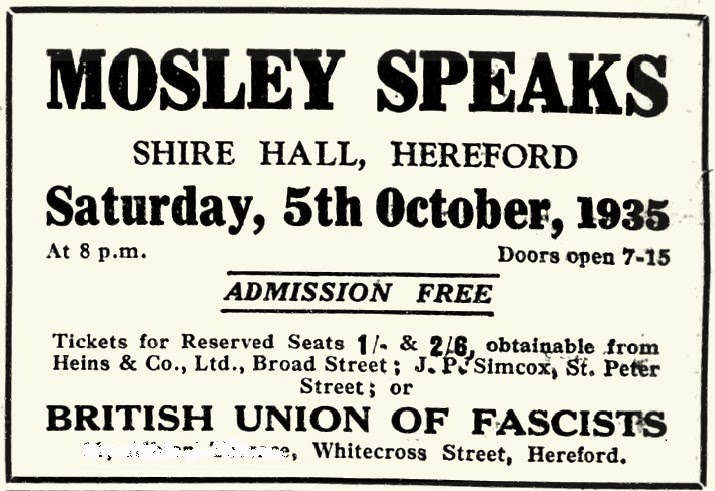 I recently took advantage of a month’s free membership to findmypast.com to have a good look through their newspapers archive. My aim was to find any information on my ancestors for my WW1 family history blog.

However I also found a number of articles relating to my interest in the interwar history of Herefordshire, and especially anything that could be tied in with the make-believe world of the Very British Civil War.

Now the main villain of the VBCW is Oswald Mosley, leader of the British Union of Fascists, and through the newspaper archive I was interested to learn that, on Saturday 5th October 1935, he actually held a rally in Hereford. Here is a summary of the report, entitled ‘Sir O Mosley At Hereford’.

Please note that this is merely a précis of a contemporary newspaper report, and not a reflection of my own personal political beliefs! 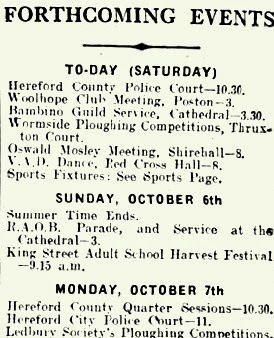 It seems that the much-heralded event generated a lot of local attention, with the numbers being so large that many were turned away from the Shire Hall, being addressed instead by another speaker (it does not say who) at an overflow meeting. The reporter wryly notes that a large percentage of the audience were young women, ‘not credited with any considerable interest inpolitics’, and conjectures that they were more interested in Sir Oswald and his‘quite handsome and picturesque black shirted retinue.’

The bulk of the meeting goers, he maintains, were simply there to be entertained, although a small minority ‘drank in the leader’s words,punctuating his points with applause’. The majority were however, content to listen politely, if unenthusiastically.

Mosley, wearing a grey suit and ‘of course’ a black shirt,took to the platform alone, standing at a table draped in a Union Jack and fronted with a fasces symbol. After raising his hand in salute and apologising for being late, began a speech that would last an hour and a quarter.

Supposedly billed to give a talk on agriculture, Mosley was obviously determined to give his full manifesto an airing, for he started off by speaking out against any British intervention in what was the current international crisis at the time: the Italian invasion of Abyssinia. Any economic sanctions, he argued, would be useless without the military capability of backing them up – a capability, he believed,that Britain was lacking at that time. ‘Was there ever such folly as to bring Great Britain to the verge of war after spending the last ten years stripping her of every means of defence?’ he thundered, to much applause.

With ‘growing fervour’ Mosley hit out against the Stanley Baldwin’s government, which he believed had ‘humiliated’ Britain by cutting back on defences and merely ‘postured’ in Geneva without the means to back themselves up. He then turned his ire on the opposition, accusing any would-belabour government of calling for war on one hand while advocating universal and unilateral disarmament on the other. He summed up this section of his speech with the British Fascists’ catchphrase of the time: ‘mind Britain’s business.’

Mosley then turned to matters of agriculture, pouring scorn on the government’s attempts to stimulate agriculture via marketing boards by claiming that ‘if the British farmer got the board, it was the foreigner that got the market’.

He then outlined the essentially two-fold Fascist policy of establishing national corporations – boards made up of representatives from employers, workers and consumers – to set prices and wages as ‘science and industrial technique increased the powers of production’, whilst simultaneously banning the import of all goods that could be produced in Britain.

Farmers would be asked to plan for maximum production in return for a reduction in imported foodstuffs, with any resultant damage in the export market being compensated, he claimed, by the increased spending power of the farming community. So why hadn't these plans been implemented by the government? The answer, said Mosley, was ‘alien, Jewish finance’.

With the City of London drawing it’s interest from foreign investment and pinning it’s resources on foreign imports, national life was at the mercy of ‘international usury’ he claimed, ‘becoming more impassioned,his voice rising to a furious, almost incoherent shout’. After this climax he sat down ‘amid fairly general acknowledgement from the audience of an exceptional oratorical achievement.’

The audience was then addressed by a Mr. C. F. Wegg-Prosser,and for 30 minutes Sir Oswald answered a selection of questions, both written and from the audience. He then thanked the audience for their interest, gave a fascist salute and left the platform. The meeting concluded with the singing of the National Anthem.

It is clear that this was no Olympia rally, the scene of much violence. In the main the audience seem to have listened with polite interest, more appreciative of Mosley’s skills as an orator than his policies.

However scuffles were reported outside the meeting. A crowd had gathered to watch Sir Oswald depart, walking down the steps of the hall flanked by two lines of saluting Blackshirts. St. Peter’s Square echoed to a chorus of booing and catcalls he sped off in his car, and the police cordon failed to hold back the crowd, some of whom broke through to exchange blows with the Blackshirts as they marched out before the police regained control.

More derision followed when the Blackshirts, after having supper at their hotel, ‘departed to the accompaniment of some mild booing and the singing of the National Anthem by the crowd, in which the Blackshirts joined’.

While findmypast’s newspaper archives are not exhaustive, there is evidence that the subject of Fascism and Mosley’s visit did cause a stir – at least if the pages of the Hereford Times is anything to go by.

A fortnight later, it was reported that the Hereford Y.M.C.A. Debating Society held a debate on the subject ‘Fascism is a menace to this country.’ Proposing the motion was a Mr. W Pigott, who that Fascism glorified war and that elections in Italy and Germany were farcical and questions the freedoms of people living in those countries. He also rejected the notion that ‘Jews held the monetary power’ and concluded that while he admired Mosley, he was ‘sorry he had become a Fascist.’

Arguing the case against this was a Mr. Clement Browning,standing in for the aforementioned Wegg-Prosser. Browning accused Pigott of allowing himself to be prejudiced against Fascism by certain papers, who ‘exaggerated events in Fascist countries’. He went on to claim that British Fascism was not necessarily comparable to continental Fascism, stating that is was no more foreign than any other political party.

He also talked of how under a Fascist government, each man would vote according to his trade, electing a member of their body to put forward ‘the most satisfactory programme in things that concerned the electors.’He also argued against the case that Fascists undermined religious freedoms,stating that Mussolini and Hitler merely put an end to the ‘squabble between churches.’

‘Fascists did not like Jews’ he conceded, but did not consider them ‘the root of all evil’ and claimed that an attempt would be made to extract England from ‘the throes of international finance.’
'Under Fascist rule everything good for England would be urged forward, and all to her detriment would be prohibited.’ The motion that Fascism was a menace was carried with a large majority. 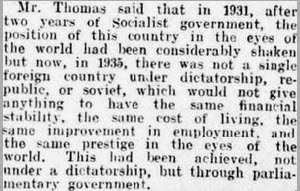 A report of an address to local trade unionists by Labour candidate Mr. George Clarke in November 1935, in which he claimed that ‘a proposal to muzzle the press was put forward by a Fascist speaker in Hereford recently',prompted a rebuttal in the letters page from one J. A. Macnab.

Macnab, admitting that local newspapers may well have ‘carried on with the British tradition’ of free press, blasted the national newspapers as being in the hands of ‘a few quick jumping millionaires’ who ‘pump their own opinions on to millions of English breakfast tables every day.’ The Fascists would counter this, he claimed, by giving the government the same rights as enjoyed by the individual to take action in the courts and impose penalties on newspapers that ‘lies detrimental to the national interest’.

The subject of Fascism and the reduction in personal freedom in Fascist countries was later taken up by Mr. J.P.L. Thomas, MP, who could not understand why any 'Englishman or Englishwoman' would wish to substitute the current parliamentary system for a Soviet or Fascist dictatorship. The subject of press regulation and general freedoms under a fascist regime continued to be discussed in the letters page over the next few weeks, with a Mr. Walter Shawcross of the local Temperance League crossing swords with a Mr. Cuthbert Reavley and none other than the British Union of Fascists’ Deputy Director of Policy, Mr. A Raven Thompson. The debate raged for some time, before the editor concluded the correspondence on the 21st December. 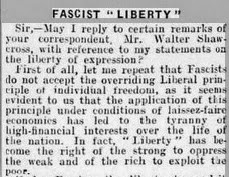 No doubt the issue of British Fascism continued to be discussed throughout the interwar years, and obviously not even sleepy Herefordshire kept out of the debate. I am heartened to conclude that, while we didn’t see our own Battle of Cable Street on that day in October 1935, Herefordians responded to the Fascists suddenly in their midst in their own inimitable style – ‘booing and catcalls’ and no doubt not a little mickey taking.