One of the most attractive facets of VBCW is being able to research the history of your own area and interweave elements of this into a fictional narrative. I did just that for my fair county when I first started writing on the GWP... 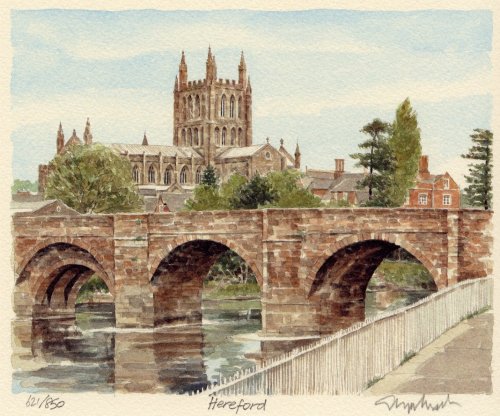 With the defeat and capture of the Bishop of Hereford, the local population, being in the main a rather conservative lot, broadly welcomed the Royalists into the county. However these authorities, distrustful of the locals and unwilling to arm them, struggled to fill the power vacuum left by the departing Anglicans with the small amount of forces at their disposal (the bulk of government/BUF troops leaving for the Severn Valley campaign).

Herefordshire's rural idyll has therefore been disturbed by robbery, raids and skirmishes carried out by a number of armed groups. Along the Welsh border, Welsh nationalists have been probing the county's defences from bases in Powys, casting acquisitive glances at North Herefordshire, Kington and the Golden Valley, with the eventual view of pushing the border of Wales up to the River Wye and thus reclaiming the Marches.

Further south, Anglican fighters that have evaded capture have drifted towards Ross-on-Wye, where the population has come under the thrall of a firebrand Welsh vicar, the Reverend Henry Meredith - the 'Bishop of Ross-on-Wye'. An embryonic Anglican force is coalescing around this cleric, supported by Welsh nationalists from occupied Monmouthshire, who hope that the newly declared 'Diocese of Archenfield' will act not only as a temporary 'buffer state', but also a land bridge between Wales and Anglican areas in the West Country and ultimately a springboard for further expansion.

The town of Ledbury is also under the shadow of the Anglican league, there being an Anglican enclave holed up in the nearby Malvern Hills, just across the border in Worcestershire. These forces are looking to link up with the Diocese of Archenfield by capturing the not-unsympathetic market town.

Herefordshire has also fallen prey to a number of socialist groups from the West Midlands, who have infiltrated the county in the guise of seasonal workers during the fruit and hop picking season. These groups are now actively agitating among local farm workers, leading to the reformation of the National Agricultural Labourers Union (NALU) and armed cadres operating under its banner.

Added to the Welsh, Anglican and the socialist menace, bands of brigands and mercenaries roam the county, selling their services to the highest bidder or taking advantage of the weak central authority to raid isolated farms for their ample food stocks before the onset of winter.

To counter all these threats the local government could at one stage only rely upon a single, rather unpopular, company of BUF, sent to patrol the county from London and garrisoned at Bromyard. Their forces have since been augmented by an auxiliary 'Blackshort' company raised in an around Leominster by one Eustace Spode, nephew of the great underwear magnate, who was obliged to take up lodgings in the county following an unfortunate misunderstanding with another young man in a gentleman's convenience near Hyde Park. The BUF and Blackshorts have formed the 'King Offa Legion' with the aim of clearing the county of 'leftists, nationalists and bandits.'

However relying on an armed fascist force does not sit well with most Herefordians and, despite orders to the contrary, the local gentry have taken to arming their estate workers and tenants. These militias, such as The Foley Manor Fencibles and Abbeydore Rangers, have come together under the banner of the Landowner's Protection Association (LPA) - a loosely knit organisation headed by landowners of varying political persuasion. One of the most colourful LPA units is the Hereford Hunt Hussars - a unit of mounted rifles (despite the Hussar appellation) formed by several keen young chaps from the local fox hunts.

Hereford city council has also bowed to popular pressure and allowed the formation of armed volunteer units. These consist of the Herefordshire Constabulary rifles, the 'Hereford Bulls' Veterans Association and the Hereford City LDV: a militia unit of trusted citizens. This 'Hereford Brigade' maintains an uneasy alliance with the King Offa Legion and the LPA - all of whom are ready for oncoming battle to protect Herefordshire and keep the county for the King (unless, perhaps, a more legitimate claimant happens to come along...)

Email ThisBlogThis!Share to TwitterShare to FacebookShare to Pinterest
Labels: Pseudohistory