One of my favorite television shows is the TV adaptation of PG Wodehouse's Jeeves and Wooster stories, starring Hugh Laurie and Stephen Fry. One of the recurring 'villains' in the show is Roderick Spode and his Blackshorts (a pastiche on Mosley and the Blackshirts). 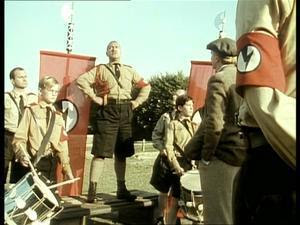 Naturally the Blackshorts were the first thing that sprung to mind when I thought about creating my own VBCW force. All I had to do was find some suitable short-wearing miniatures, and work the organisation into my interpretation of Herefordshire.

So first, the miniatures...

A Coy. The Marches Blackshorts.

B Coy. The Metropolitan Blackshorts.

Boys anti-tank rifle team.
Secondly, the backstory (as seen on the GWP)...

The Blackshorts and Herefordshire: a short history

Roderick Spode and the Blackshorts

"The trouble with you, Spode, is that just because you have succeeded in inducing a handful of half-wits to disfigure the London scene by going about in black shorts, you think you're someone. You hear them shouting "Heil Spode!" and you imagine it is the Voice of the People. That is where you make your bloomer. What the Voice of the People is saying is: "Look at that frightful ass Spode swanking about in footer bags! Did you ever in your puff see such a perfect perisher?"

Before the civil war, the Blackshort movement was just another crack-pot pseudo fascist paramilitary organisation. It was founded by the 7th Earl of Sidcup Roderick Spode – amateur dictator, proprietor of Eulalie Soeurs underwear emporium, jewellery expert, designer of the collapsible channel bridge and a man appearing "as if Nature had intended to make a gorilla, and had changed its mind at the last moment."

The Blackshorts espoused a philosophy similar to many other right-wing groups: protectionism, rationalisation and the ‘scientific’ categorisation of the British populace. For Spode, this meant banning the import of foreign root vegetables and instead encouraging every free-born Englishman to grow his own potatoes, while giving over entire counties for the cultivation of a single crop (turnips for Gloucester, beans for Wiltshire, Wales and Scotland nothing but potatoes.)

He also planned to ensure that every citizen owned a British umbrella and an ‘honest, British-made bicycle’ (to be manufactured solely in Norfolk, along with motorcars), thus ensuring a mobile workforce adequately protected against the elements. While many groups would grade this workforce by race or class, for Spode and the Blackshorts the only feature worth measuring was the knee.

The Blackshorts and the civil war

When King Edward VIII installed British Union of Fascists leader Oswald Mosley as Prime Minister and the flames of civil war began to break out across the country, once-derided organisations such as the Blackshorts took on an air of legitimacy.

For many people, anxious to ‘get on’ under the new regime, the prospect of joining a uniformed paramilitary group less sinister than the BUF was an attractive one. Recruits flocked to the smaller, more ‘harmless’ groups such as the Blackshorts, hoping to gain the kudos of wearing a right-wing uniform without the onerous duty of having to fight or hail Mosley as leader. The Blackshort organisation grew, much to the alarm of Mosley – jealously guarding his influence and determined to stamp out any independent movements in the metropolis.

Soon other smaller groups were being disbanded or absorbed into the BUF, but with the Blackshorts Mosley had a problem: Eulalie Soeurs had become a favourite haunt of many influential women, including none other than the Royal Consort, Queen Wallace. Moving against Spode was to move against Eulalie’s ‘Royal Appointment’. The only option was to move the Blackshorts away from London and post their armed militia to distant parts of the country.

“When one can no longer approach a chap in a gentleman’s convenience to inquire after the time, without being roughly apprehended by a plain-clothes policeman – well it’s a bally nuisance!”

Spode was reluctant to relocate from the capital lest distance diminish his business and political clout, but found himself under severe pressure from the government to conform to Mosley’s will. Luckily, a solution was soon discovered, for out in the depths of rural Herefordshire a smaller Blackshort group was being formed under the aegis of Lord Sidcup’s nephew, Eustace Spode.

Eustace had been exiled after an unfortunate misunderstanding that had not only left a stain on his character, but also the Spode name. Under instruction to form a branch of Eulalie Soeurs in Herefordshire, Spode the younger was desperate to worm his way back into his uncle’s good books and as such began to form an embryonic Blackshort cadre from his circle of friends and any sympathetic locals who, like their London brethren, hoped to further themselves by joining a right-wing force.

Organisationally, Eustace’s Blackshorts were part of the royalist King Offa’s Legion alongside the BUF. Tasked with securing the border against Welsh nationalist incursions, King Offa’s Legion suffered from a crippling lack of manpower. Under pressure from action by the Anglican League and the Malvern Hills Conservators, the BUF elements of the Legion were reorganised into the Three Counties Legion, leaving Eustace Spode in sole charge of King Offa’s Legion.

This situation presented both Mosley and Spode with an ideal compromise: Spode could continue to finance his Blackshorts, provided they were sent to the provinces to reinforce existing royalist units. Thus Eustace found himself not only in command of his original ‘Marches Blackshorts’ company, but also a full company of more well-equipped but less experienced ‘Metropolitan Blackshorts’, complete with heavy support weapons, paid for by Lord Sidcup.

"Nothing stands between us and our victory except defeat!"

And so the forces of fascism had a new champion in the barbaric backwaters of the west of England - King Offa’s Blackshort Auxiliary Legion. Standing firm along the Anglo-Welsh border, the sturdy-kneed Blackshorts of Herefordshire were ready to fight the grubby, knock-kneed Welshman; the thin, knobbly kneed Bolshevik and the fat, puffy-kneed Anglican in the name of the true King, Edward VIII, his royal spouse and purveyors of top-quality ladies’ undergarments everywhere!