Read All About It – Part 2: Training Centres

Regular readers of this blog will know that I have an interest in the Training/Instructional Centres during the interwar period – places where the long-term unemployed were supposedly ‘hardened up’ by undertaking physical labour in order to make them more suited to working life.

I became interested when I discovered that there was one such Instructional Centre in Shobdon, Herefordshire, with a satellite camp just across the Welsh border at Presteigne. I recently wrote a short entry on Shobdon camp, which can be found here. While trawling through the newspaper archive on findmypast.com, my thoughts turned to the subject of such establishments, and here’s what I found…

A newspaper report on 26th April 1930 told how, on the previous Wednesday evening, a fire was reported at the ‘Government training camp near Presteign’ (sic). Captain G.F. Rawlings of the Presteigne Fire Brigade arrived on the wooden-hutted camp to find the staff quarters ‘burning fiercely’.

Capt. Rawlings discerned that the staff quarters were beyond help, but by drawing water from a nearby stream his men were able to save the numerous wooden buildings nearby (although hampered by an out-of-date appliance), including the large stores, which only suffered some scorching at one end. Sgt. Bailey and the local police were also on hand to render assistance.

The staff quarters, some 20 x 20 ft. square, was completely destroyed. The staff, trainees and voluntary workers at the camp worked hard to save the contents, rescuing a piano, billiard table and some articles of furniture, but were unable to save the rest, including the staff’s personal property. The cost of the damage was estimated at over £1,600 and the cause thought to be an overheating oil stove.

November 8th 1930 saw another report related to this training centre, when Presteigne Urban District Council met to discuss a proposed scheme to extend the local sewage system. There had obviously been an intention to include the training centre in this scheme, but, it was revealed, the Home Office of Works had been unable to state what assistance they could provide as the exact status of the camp was currently under review.

Another idea was to obtain extra funding from the Unemployment Grants Committee, seeing as work would be generated by the adoption of the scheme. Council member the Rev. H.L. Kewley stated that they would have to start the scheme soon, and that they had ‘better get on with it.’ This isn’t the most interesting of stories, but it does show how the camps were linked to the local community and how the local authorities tried to use the camps to obtain more funding!

Moving forward to March 2nd 1935, to the Instructional Centre at Shobdon, we learn of Messrs Price and Davage, two camp inmates from Abergavenny and Blaenavon respectively, who pleaded guilty at Kington Police Court of stealing a couple of cycle lamps from an address in Pembridge.

Magistrates heard how the pair, half way through their 12 week course, had been drinking cider and ‘were not used to it’ on the day in question. The manager of the camp, Mr. J. MacGregor, stated that their conduct during the first 6 weeks of their course had been exemplary, and he was at a loss as to explain their behaviour. As punishment he had confined the two men to camp for a fortnight, and pressed for leniency, citing the fact that they had been unemployed for a considerable period of time and had volunteered to join the camp in an effort to improve their lot. After due deliberation the two men were fined 10s and ordered to pay additional special costs. MacGregor then stated that they would return to their homes. 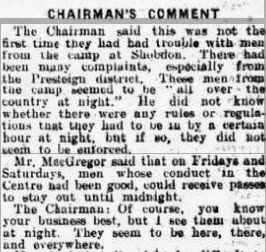 Also included in this article is an interesting debate on the general behaviour of the camp inmates, with the magistrates complaining to MacGregor that this was not an isolated incident and that men from the centre seemed to be ‘all over the country at night.’ ‘They seem to be here, there and everywhere,’ said the chairman. Why, he wondered, could they not be controlled as well as in a military centre?

MacGregor expressed surprise at this, stating that only men of good conduct received a pass to stay out until midnight. He said that he had received no complaints about his charges behaviour in recent months and believed their conduct to have improved. This was backed up by evidence from Police Sergeant Owens, who stated that the conduct of the camp attendees at Wigmore and Shobdon had improved in the last two years, and it was a small minority who gave the majority a bad name.

Shobdon camp also got a mention later that month when Hereford United player and former inmate, J.I. Evans from Merthyr, was signed by Arsenal. This transfer signified a much-needed windfall for Hereford United which, much like today, was in financial difficulties.

While at Shobdon, Evans played for Presteigne in the North Herefordshire football league, before joining Hereford’s reserve team. By now he had left the centre and, still being unemployed, accepted an invitation by the club to turn professional. Click here to read more about Jimmy Evans. 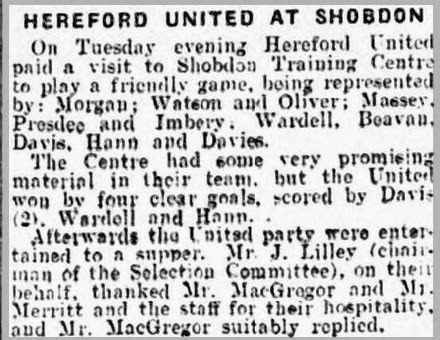 This shows how the camps integrated into the surrounding area, at least on a sporting basis. Many fixture listings in the archives include a ‘Shobdon Camp’ team. In fact on May 4th 1935 a team from Hereford United visited the centre for a friendly match, followed by a supper. MacGregor and his staff were duly thanked for their hospitality.

When not playing football, inmates were given ample opportunity to read, as evidenced by a short article later in the year, where the annual report of the Herefordshire County Librarian highlighted the ‘considerable growth’ of the library system. Listed in the number of newly-created distribution centres is one at Shobdon Instructional Centre.

Further ties to the local community were forged when Shobdon camp’s welfare officer Mr S.D. Kennett acted as MC for a whist drive at Hanbury Memorial Hall, Shobdon. The winners came from Shobdon, Townsend and Pembridge, and included a Mr. J. Grindley – a member of staff at the camp.

The June 15th edition of the Hereford Times reported a more dramatic occurrence after a motor-coach carrying 24 passengers en-route from Merthyr to Shobdon Instructional Centre caught fire near Kington cemetery.

The passengers were able to exit the coach without injury but by the time the local fire brigade arrived the fire, believed to have been caused by a fused lighting circuit, had gutted the vehicle.  The unfortunate passengers were later ferried to the camp via a local coach. 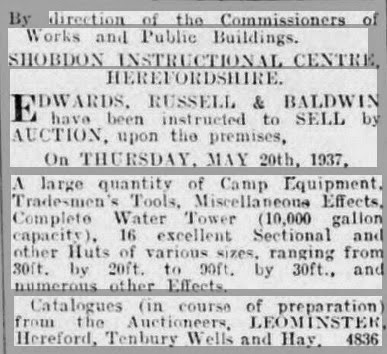 By early 1937 Shobdon Instructional Centre’s days were numbered, and advertisements began to appear announcing that the camp and it’s contents would be sold by auction on May 20th. The Commissioners of Works and Public Buildings had directed Leominster auctioneers Edwards, Russell & Baldwin to conduct the auction on the camp premises, offering everything from camp equipment and tradesmen’s tools to the 10,000 gallon water tower and huts, ranging from 30x20ft to 90x30ft in size.

In the May 15th 1937 edition of the Hereford Times – the same day that an advert for the auction appeared – was a sad postscript to the centre’s history, for it was reported that Mr. James Evans, former deputy manager of the camp, died following a motoring accident in High Wycombe the previous week. 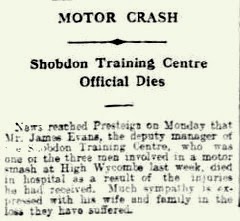