Last week I had a rare day to myself – and what does a footloose and fancy free guy do when he’s at liberty? Well he visits a couple of local museums of course!

First stop was Hereford’s Waterworks Museum, situated at the site of the old pumping station. The museum showcases engines and pumps from the start of the industrial revolution onwards – many in full working order. There are some amazing pieces of machinery here, all lovingly restored by a team of enthusiastic volunteers who are happy to explain the workings of their pride and joy(s).

Herefordshire lacks any large lakes, the right geography for reservoirs or significant underground aquifers, so the River Wye was seen as the only effective water source. Hereford, like many towns and cities, suffered from epidemics of water-borne diseases. In response to this, the Hereford Improvement Act of 1854 enabled the City Fathers to provide paved streets, gas lighting and a piped supply of drinking water.

To facilitate the latter a site was chosen at Broomy Hill – a location higher than the city centre and adjacent to the River Wye. Upon the completion of a pumping station, water could be pumped from the river, filtered and then fed by gravity to the city.

As Hereford grew and nearby hills were urbanised, a water tower was built, acting as a giant ‘header tank’, thus providing mains water pressure to these new areas. The pumping station was also enlarged throughout the period (the last annexe being built in 1906), reflecting the transition from steam to diesel, and thence electric engines to power the pumps.

In due course Herefordshire’s other towns had pumping stations built; for example the people of Leominster suffered particularly from water-borne diseases and the authorities were directed by the government to do something about it.  The pumping station was built in the 1860’s, taking water from a local aquifer, which quickly ran dry, necessitating a more distant source.

The advent of World War II saw the expansion of the Royal Ordinance factory at Rotherwas, which also needed pumping equipment as part of the necessary fire-fighting requirements. A reservoir was dug and a pumping house, guarded by a pillbox, was constructed.

Meanwhile more rural areas continued to rely on age-old wells, boreholes, streams etc. and the countryside was dotted with local reservoirs, hydraulic rams, water wheels, wind-powered pumps and the like until the introduction of a county-wide mains water distribution scheme in the 1960’s.

The Waterworks Museum tells this story much better than I can, with equipment from all stages of Herefordshire’s quest for safe drinking water on site.

Not only is the evolution of the Hereford’s main pumping house demonstrated, but Leominster’s pumping station has also been rebuilt, showcasing the infrastructure of the satellite towns. Following the chance discovery of the Rotherwas engine, an exhibition detailing Hereford’s WWII heritage has also been constructed, with the original fire-fighting equipment lovingly restored to full working order.

The museum is definitely worth a visit, especially if you’re into old machines or interested in Herefordshire’s civic history. The museum shop sells a nice selection of books which give more information on the subject and guided tours for schoolchildren are available.

Any faction wishing to maintain their grip on Herefordshire’s towns must surely hold the pumping stations – not only that of Hereford but also Leominster, Ross, Ledbury, Bromyard and Kington. Control of the towns’ water supplies would be of paramount importance (provided one could also control the gas and electricity supplies).

Hereford’s water tower, still I believe the tallest structure in the city, would offer unparalleled views of the area – most useful when keeping a lookout for enemy factions.

However in the 1930’s, rural areas still depended on local sources and would be largely independent of water suppies from the towns.  As is so often the case in these situations, holding the cities and towns is one thing, controlling the countryside is another… 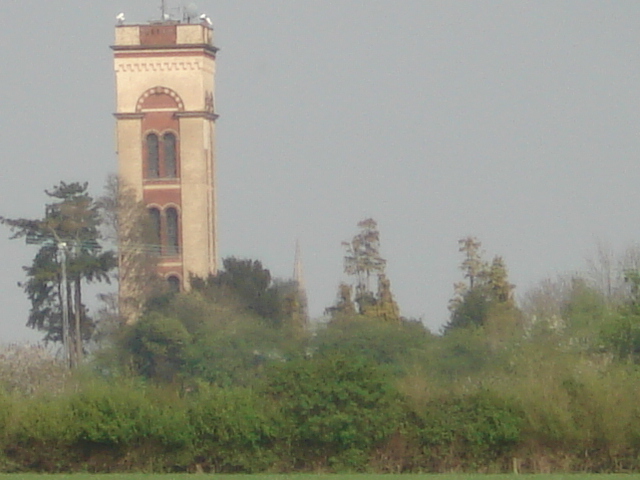